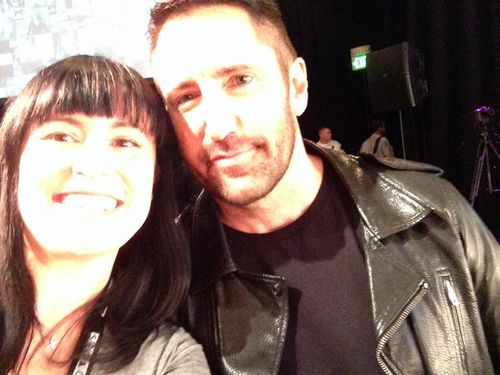 As I write this it’s about zero degrees in Boston with a wind chill I’d rather not think about.  The silver lining to this frigid day is that I get to share a new song with you called “Me Without You.”  I decided to release it around the new year since it's about breaking habits and letting go of people who bring you down.  It's on iTunes and you can listen here:

I’d also like to share one of my highlights from 2014: meeting one of my Rock God idols.  I’m tempted to make up some ridiculous story about how I got this picture with Trent Reznor.  Maybe we worked on something together or maybe he sent ME fan mail.  (To quote Wayne’s World “Shyeah, and monkeys might fly out of my butt!”)  In reality, he was kind enough to pose for this picture during a music conference I attended in LA.  It was a definite high point in a crazy week of insane driving, watching people take selfies of themselves with sunglasses on indoors, notorious LA traffic (and more talk of traffic) and me attempting to wear fashionable fall clothes on a 90 degree day.  (In my defense, it WAS November!)  It was amazing to hear a mentor say great things about my music while overlooking the famous Hollywood Hills and see old friends who have relocated*, but I’m definitely an East Coast girl living the Red Line Blues.