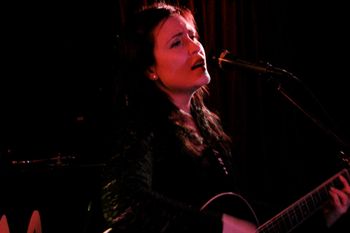 Like a lot of musicians and music lovers, I was fortunate enough to visit NYC for the CMJ Music Festival just a week before Hurricane Sandy.  I spent a week prepping for a headlining gig at Ella Lounge on Ave A, schlepping my guitar on the subway, making every elevator pitch I could and self-medicating with baklava in Astoria each night.  ;)

This was the first year the powers that be decided to take the bold step of combining on-the-spot career counseling and performance in the form of a Pitch Party, a first-come first serve musical melee moderated by professional song publishers, music supervisors and A&R reps that are otherwise quite hard for a girl from Boston to access!  They were crazy enough to offer it, so here’s my story of being crazy enough to go for it.

“I’ve been here for three days and I already have a nemesis.  Or maybe I should say rival, that sounds nicer since we’re in the same field.  Regardless, she wants to steal the spot in line I’ve earned for myself by waking up earlier than she did and the tension is building while we try not to stare at each other in a small hallway.  The only other person with us is a kid from Jersey who wants to borrow my gear and complains when I am protective of it.  The vibe is far from comfy but I’ve done my share of cattle calls that stretched around city blocks and I’m prepared to hold my own with two people who seem like compilations of dozen of ahem, “characters” I’ve met over the years in the industry.

When small-talk boundary setting doesn’t work and the girl simply tries to rush the door I’m camped out in front of, I get through it first.  I’m not sure of how this is physically possible given everything I have with me and her head start but where there’s a will, there’s a way and sometimes being shorter (and insane) has its advantages.  I snag the prime location: directly in front of the moderator and position my guitar so it is clear I am ready to play.  There’s exactly one hour during the festival they are picking people to sing on the spot and I plan to make the most of it.  Forty minutes of tension pass as the room fills and I reflect on just how bonkers the scene at the door got so quickly but console myself that people have done far more ridiculous things at Black Friday sales.

The reps everyone plans to circle and throw demos at take their seats.  One observed me camped out in the hallway and tells the rest he’s picking me to begin the session.  And just like that, I’m now standing up in the middle of a room full of people who wish it was them at the mic.

I sing and play “Just Rain” like my life depends on it.  I know I nail the vocal and my guitar playing is solid despite being able to feel every muscle in my arms react to each time I strum.  It’s either a strange side effect of the flu-like bug I’ve been fighting off or sheer adrenaline, but I don’t let it stop me.  The reps are stone faced but no one in the crowd talks and a photographer begins taking pictures with a flash.  I finish the song and take the deepest yoga tummy breath I can while the room generously claps.  I take one more deep breath as the feedback begins.

The critique is surprisingly short and sweet: am I aware that I have used a non-traditional form as a songwriter?  Could one or two lyrics be altered or sung differently?  How different is my live version than the recorded version?  The panelist who volunteers to address me is wearing her sun glasses inside and sounds like she’s been out closing rock clubs four nights in a row, which is probably the exact truth.  The other panelists echo her feedback.  There is nothing said about my performance, vocal or even guitar playing for better or worse.  I take another deep breath and thank everyone for listening before reclaiming my seat.

No one else in the room has the guts to sing live.  The people selected stream professional music videos their record labels have paid for or promotional material they’ve talked young film makers into creating on spec.  A few people play something from a CD.  One turns out to be a minor hit from a few years ago played on prime time television.  I’m familiar with the artist and am surprised to see she still has to pitch her own work.  She’s toured internationally and has played the Paradise in my hometown.  She's worked with people I idolize.  This is not amateur hour.

The first moment I have to feel vulnerable again is a few hours later when I have lunch alone outside.  I feel like a bit of an old Folk foggy for having actually developed my live musicianship instead of video budget until I come to my senses.  I observed the panel critique every single thing they didn’t like for others even if there was studio magic involved, so if they had nothing to say about my live performance then it’s probably one of the biggest compliments I could get from them!  I’m the only one who had the nerve to get up there.  I make some mental notes about the songwriting tweaks they suggest then watch a pigeon dive bomb into a neighboring table, stealing someone’s hero.  Maybe it’s my lucky day after all!”